I love the look of the posters I see all over Pinterest, but I don’t know if I would have thought to put them on a cookie if SugarBelle hadn’t done it waaaaay back in the fall. (Look at me following up a post about finding your own thing, with a post about copying someone else!!!) Although, wanting to work on piping and words, there is really no better way to practice- besides piping endless circles onto a paper towel. You get tons of practice and really cute cookies to boot!

These take a little planning. The first thing I did was write out a list of words I wanted to include. I decided to go with nicknames. (Except “smarty pants”. I’ve never actually called her that, but I needed one more word, and did I ever mention how smart she is? She’s five, and she reads. And she has been asking us to start practicing adding with her. Smarty pants.)

Next, I sketched out a basic outline of how I wanted the cookie to look.

Then I just started filling in words. This would have been a little easier with a KopyKake, but when Bryan gave me the choice between a Kopykake and a DSLR for my birthday, I went for the camera.

If you are doing it freehand, just be flexible. The easiest thing about these, is that if a word doesn’t quite fill a space, you can add a heart or something. There aren’t any rules. I do suggest filling in the hearts AFTER you add the words, though. You can see on Ben’s cookie, I added the heart first and ran out of room for my word.

I don’t think it would have had the same affectionate tone if I had just put “Blue Eye”. In fact it felt creepy. So I had to scrape it off and  pipe smaller, kicking myself that there was more than enough space on the OTHER side of the heart. Oh well, he is still going to mash the whole thing in his mouth while yelling “Cooookkkkiiieeee nom nom nom nom nom”. Oh, yes he does. He is not quite two and he imitates Cookie Monster. Crumbs flying and all. AND he actually says “Coooookkkkkiiiieeeee nom nom nom nom nom.” As soon as I can figure out how to post videos from my camcorder or phone, I’ll prove it.

And Ellie will love hers because I wrote Half-Pint. 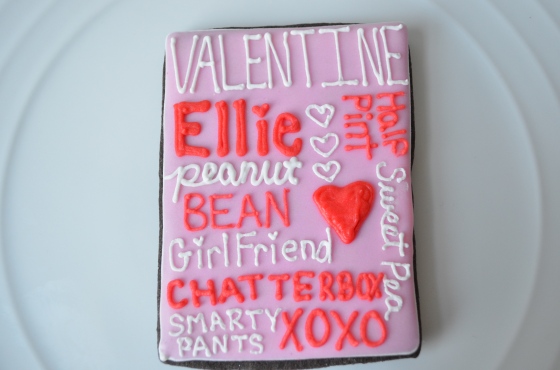 If you’re wondering, it was Pa’s nickname for Laura, and Ellie and I are still working our way through the Little House series.

You don’t need to go all out with different fonts, colors, or even words. For a simple Valentine cookie that gets to the point, just find a cute quote (I found mine on Pinterest) and pipe it onto your cookie anyway you want. Like this one that I made for Bryan:

Is it obvious that I am not the romantic one in my marriage, lol?

Hi, I'm Stephanie! I am a wife, mommy of two, and a part time dental hygienist. Right now, my husband is in graduate school and I am home with the kiddos- A LOT. To relax, I bake cookies for my friends, I take pictures of the cookies, write about them, and post here and to my Facebook page. I hope you enjoy looking at them! And I LOVE comments ;)

Find Me On Google+