We know how much you like to cry happy tears, so we thought we’d help you out by giving you another reason! 🙂

Kim (of The Cookie Puzzle) and Melissa (of Simply Sweets by Honeybee) invited us all to participate in a grand-baby shower for you. You do so much for everyone you know. You are one of the best friends I have never met. So we wanted to do something for you.

We were all going to make a dish and it was going to be a big party.  The only problem was that we all wanted to be the one to bring the cookies. In the end, we decided to just make it a cookie party. The theme? A child’s book.

I brought “LadyBug Girl” (by Jacky Davis and David Soman- the cookies are based on the illustrations by David Soman).

“LadyBug Girl” is about a little girl named Lulu. Lulu’s mother tells her she needs to entertain herself for a morning, and her big brother tells her she is “too little” to play with him and his friends. Lulu, despite a bedroom FILLED with toys, finds herself with nothing to do. So she ventures outside.

At first Lulu dwells on her big brother’s comment. Then she decides that Lulu may be “little” but LadyBug Girl isn’t and, as LadyBug Girl, Lulu spends the morning doing BIG things in the backyard. 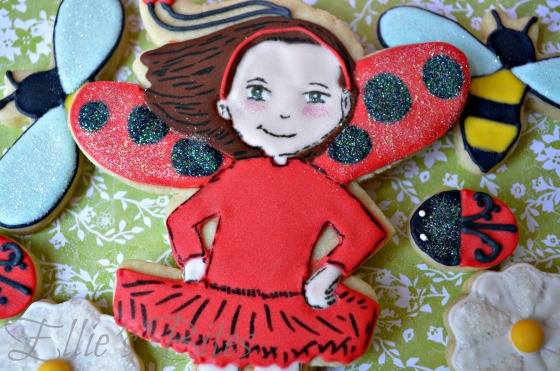 Ellie and I love this book. I love how LadyBug Girl teaches little girls (and boys) that they are only “little” if they let people make them feel little. And, I can’t lie… I think we both want those red polkadot Uggs and the frilly red tutu for ourselves!

So, Cristin! I hope you liked the LadyBug Girl cookies! Don’t stop here! This party was thrown by twelve of your biggest fans! And each “cookied book” is better than the last!

3)Oh, The Places You’ll Go! by Shannon of The Sweet Shop Cookie Company;

5)Camilla the Cupcake Fairy by Melissa of Simply Sweets by Honeybee;

6)Are You My Mother? by Stephanie of Sweets by Steph;

8)Because I Love You by Jamie of Fresh Baked;

9)Pat the Bunny by Margaret of Edible Canvas Creations;

11)Birdie’s Big-Girl Shoes by Ansa of Sweet Treats by Ansa;

12)If You Give a Mouse a Cookie by Kate of Kooking in Kate’s Kitchen;

So, I hope you enjoyed your party Cristin! Are you ready to be a grandma?

Hi, I'm Stephanie! I am a wife, mommy of two, and a part time dental hygienist. Right now, my husband is in graduate school and I am home with the kiddos- A LOT. To relax, I bake cookies for my friends, I take pictures of the cookies, write about them, and post here and to my Facebook page. I hope you enjoy looking at them! And I LOVE comments ;)

Find Me On Google+